NaNoWriMo's In Your Pocket Summer Drive 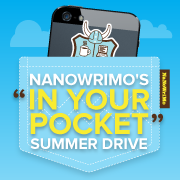 One of the Web Badges used to promote the drive

NaNoWriMo's "In Your Pocket" Summer Drive was a June 2013 summer fundraiser. The goal of the drive was to raise $50,000 toward a long-requested mobile version of the NaNoWriMo website.

While Wrimos could donate any amount just as they can any time of year, a $50 donation earned the donor access to the Planning for Pantsers and Pantsing for Planners webinar featuring founder Chris Baty, a "Novelist at Work" door hanger. a NaNoWriMo-crest screen cleaner. and 30% off any purchase from the Chronicle Books online store.

To promote the drive, the OLL staff created a video and web badges for participants to share. As well, OLL championed the #my1ststory campaign on 20 June, where Wrimos shared their first story in order to show the creative fire NaNo can spark in children and adults. Wrimos shared their first story on Twitter, Facebook, and Tumblr, while OLL reblogged and retweeted these tales.

OLL also hosted a #nanoprep Twitter chat on 24 June as a preview for the webinar.

NaNoWriMo also gave donors a chance to win a Kindle Fire. As with all contests of these nature, Wrimos technically did not have to donate to this fundraiser to win.

The summer drive netted $15,000 toward a mobile-friendlier website, which launched in October 2013.

After the fundraiser, the webinar continued to accept registrations through 16 September for $75, while the door hanger and screen cleaner were available as additional donor goodies for monthly donors.