Difference between revisions of "Word war" 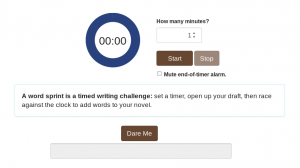 A word war (also called word sprint, or simply war or sprint) is a short timed challenge in which Wrimos write as much as they can in a short period. These challenges may be conducted with other writers on the NaNoWriMo forums, at a write-in, in chat rooms, or via Twitter. Participants may also conduct a word war alone by setting a timer or using a program such as Write or Die.

As of 2016, the NaNoWriMo website hosts a simple tool for timing word sprints, along with prompts.

Word wars may be conducted with specific goals in mind (such as the Box of Doom challenge or challenges to write so many words in any interval from five minutes to a day), races to see who can write the most in the set amount of time, or simply a set period of time to write as much as possible in the Write or Die fashion.

There is an official Word Sprints Twitter feed that runs timed word sprints throughout the season, starting in September in preparation for relaunch. Sprints on the official feed run from 10 to 60 minutes long, with the most common being 20-30 minutes. In 2010 the sprints were run by various members of staff and interns including Dragonchilde, Sarah Mackey, Cybele May and Nora Coon. In 2011 hand-selected volunteers, primarily MLs from around the world, joined the word sprint team to provide around the clock sprints.

Online word wars on ChatNaNo and Goodchatting IRC servers are moderated by Timmy, and BattleJesus respectively. Both provide warnings before the start and at various intervals throughout the word war. Users can post their word count at the end of the word war, though on a strictly honor basis.

While everyone who writes in a word war is a winner, word wars can have winners, such as during write-ins. However, in a group of writers with various writing speeds, one or two people may consistently write the most words in a war. For situations like this, the word war host may want to use different criteria for declaring the winner. A few ideas:

While the primary differences between word wars and word sprints are in naming, a few differences stand out.