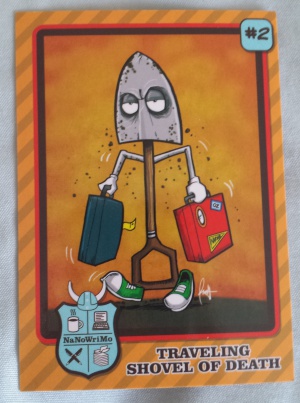 The Traveling Shovel of Death as illustrated on a NaNoWriMo trading card.

The Traveling Shovel of Death (or TSoD) is an all-purpose plot device that has become primarily associated with NaNoWriMo, although it is of course applicable to Script Frenzy as well. It consists of a shovel that can be used by a character - or multiple characters - to commit murder(s), thus propelling the plot forward when things are moving too slowly. Much like Mr. Ian Woon and the trebuchet, the TSoD is used by numerous Wrimos each year as both a NaNoWriMo inside-joke and as a functional part of the plot. Unlike an ordinary adoptable, however, the TSoD is always up for grabs and available to any Wrimo who requires its services.

Though it has doubtless existed for eons, its string of murders in NaNoWriMo novels was first identified in 2005, originating in yangnome's (Al Stegall) novel, a "...very dark and gritty novel about a political prisoner in a north Korean prison camp". Shortly after writing the scene in which the shovel was used, he returned to chat to find that another Wrimo had also used a shovel as a murder weapon in their novel. Al recalls the following:

"I posted about it in the forums, and TSoD began appearing in novels around the world. This has happened year after year and continues to bring a smile to my face. A couple years after the first thread, the link to TSoD was placed on the front page of the NaNoWriMo site as a highlight and the thing went viral. Then, a couple years ago, TSoD even got its own trading card. TSoD has brought death to countless millions—entire universes even—across time, dimensions, etc."

The word "traveling" in its name is derived from the fact that, as the TSoD may appear in hundreds of different NaNo novels, it appears to be the same shovel that is merely jumping from story to story. It may also appear unbidden in a novel and/or kill a character that the author had not originally planned to kill. Thus, the TSoD is sometimes considered to be an almost sentient character, albeit one with murderous tendencies.

What can I do with the shovel? Use it as a murder weapon. Kill a main character, a supporting character, or even a background character.

What if I don’t like violent scenes? Have the shovel show up bloody on the ground, or maybe just beside a body that has been beaten. You don’t need to describe the murder to use the shovel, though I’m sure it wouldn’t stop you.

Why use the shovel to murder someone? Easy, it provides conflict. Conflict drives stories.

Couldn't I just use a gun or a knife, maybe a sword? I’m sure you could. Personally, I haven’t seen any guns, knives, or swords traveling around from novel to novel wreaking destruction though. The shovel is something bigger than you or I. It is bigger than our novels. It is a weapon of mass destruction if you will.

What if I don’t want to use the shovel? No one is forcing you. Don’t be surprised though if it pops into your novel. It popped into mine. Others who heard of the shovel couldn’t resist. Can you?

Does it have to be used as a murder weapon? I suppose not, but the shovel has developed a taste for blood.

What do I do with the shovel when I am done? Return it. Set it free so it can travel to another place, another land, maybe even another world.

I’m still not convinced. Well, use of the shovel will provide you with words. Anyone could easily milk a small 1,000-word scene from the shovel. Those more talented could get more. Heck, I’d bet someone could even get a whole novel out of the shovel’s exploits.

Are there any rules regarding the use of the shovel? No, but we would like to hear about its use. Post the fact that you send it here, and maybe the excerpt from its use.

This sounds silly. It couldn’t possibly fit in my novel. Maybe you are correct. I don’t know what you are writing about. The first year the shovel visited me, I wasn't writing a silly novel and it fit in mine with little problem. TSoD does not discriminate based on genre.

Anything else I need to know about the shovel? No. Well, don't turn your back on it.