Difference between revisions of "Tom Selleck" 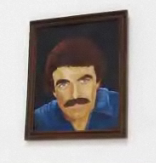 Tom Selleck is an American actor and film producer. He has appeared in TV shows such as Magnum, P.I., Friends, and Las Vegas.

The Office of Letters and Light has a painting of Selleck, contributed to the office by Lindsey Grant[1]. In their first office the painting hung on the wall next to Lindsey's desk. Lindsey acknowledged the painting in the "Joining a NaNoWriMo region" NaNoVideo episode, in which she ends the video to set up Selleck's regional affiliation. [2]. After the OLL staff moved to a new office in Berkeley in May 2010, intern Sarah Mackey included the painting of Selleck in her tour of the new office [3].