Difference between revisions of "Region/USA/MN/Twin Cities"

From Wikiwrimo
< Region‎ | USA‎ | MN
Jump to navigationJump to search

The Twin Cities region is a NaNoWriMo region covering the metropolitan area of Minneapolis, St. Paul, and their surrounding suburbs.

The region is traditionally one of the largest (with over 4700 members registered for 2011) and most productive (8th place for 2010 total wordcount) regions in all of NaNoWriMo.

The Twin Cities region has consistently grown each year and from the initiation of Municipal Liaisons (ML) in 2003 has been a force to be reckoned with. Beyond the MLs though, there are many active participants who invest time and energy during an already busy month to encourage others by hosting dozens of write-ins throughout the Twin Cities and our Iconic Events. If this region was only about the efforts of our MLs, we wouldn't be nearly as successful as we have been, and we have all our members to thank for that.

--Note: For 2013, the kickoff has been relocated to Wilde Roast Cafe due to projected high attendance. 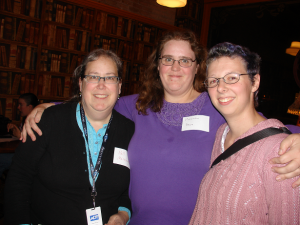