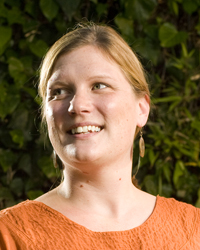 Lindsey Grant was the NaNoWriMo program director at the Office of Letters and Light. She completed her undergraduate education in her home state of Georgia[1] and earned an MFA degree in creative writing from Mills College[2]. She then joined OLL as the first community liaison and participated in her first NaNoWriMos and Script Frenzies, completing the challenge each time. When Chris Baty took on the executive director position full-time in summer 2010, Lindsey became the new NaNoWriMo program director[3]. Nancy Smith joined the OLL staff and took over the community liaison post[4].

After NaNoWriMo 2012 Lindsey stepped down in order to pursue a full-time writing career and a move to Switzerland. Chris Angotti took over as Director of Programs.

At some point in the past Lindsey earned money by walking dogs, as evidenced by a book she is editing based on those experiences. She enjoys writing, food, traveling, and anything that will combine those activities[2]. She shares a love of Disney music with Sarah Mackey[5].