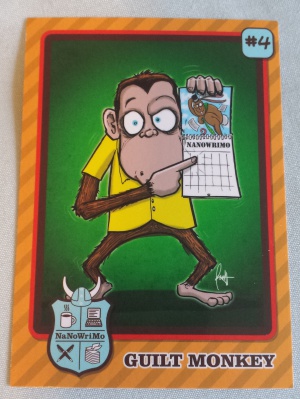 The guilt monkey as it appears on a NaNoWriMo trading card.

A Guilt Monkey is a monkey that guilts you into writing.

This term appears to have originally become popularized in William Onken, Jr. and Donald L. Wass' 1974 article for the Harvard Business Review titled Management Time: Who's got the monkey?. In the article, the hypothetical monkey is a problem hanging off of an employee who then passes it off to manager to deal with instead of addressing it themselves. A 1999 link to the article referred to it as one of their two most popular reprints at that time.

The concept was well enough known in the late 1990s that Accoutraments, self-titled Outfitters of Popular Culture, sold plastic monkeys that could be handed back to employees when they attempted to hand off a 'monkey' to their manager. 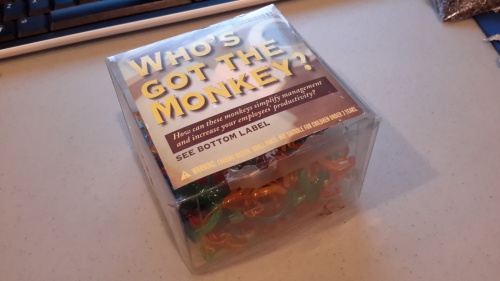 In 2012 the guilt monkey was featured on a trading card for the 2012 Summer Fundraising Drive. Interestingly, this article did not exist at the time, so the NaNo staff couldn't link to it in explanation.