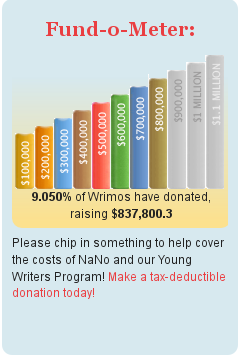 The Fund-o-Meter measures how much of the target donation to the Office of Letters and Light has been funded. It can be found on the main page of the NaNoWriMo website in the form of a graph of books that are colored in as the goal gets closer to being met. In 2010 and earlier, each level had a pop up box showing what would be covered by that amount. In 2011, this was replaced with a page of the site entitled "Where Your Donation Goes". Below it is the current stats for the year including what percentage of Wrimos have donated and how much money has been raised overall. Currently, the 2012 NaNoWriMo fund-o-meter, which will be updated through the end of the year, shows a raised amount of approximately $999,750, just under 91% of the 2012 fundrasing goal of $1.1 million.